Tao Lin has a contest through which you can receive a free book, money and various other ‘one of a kind’ prizes depending on the length/chosen medium of your submission. The different mediums to choose from are: gmail chat/essay, video interview/discussion or a video of someone saying ‘Richard Yates’ with 3+ people responding. I’ve chosen to write an ‘essay’, seems like the most straightforward option.

I briefly considered going to the supermarket I’m working at for the summer, putting my mouth to the loudspeaker and repeatedly shouting/screaming/whispering/sobbing/saying-in-various-borderline-offensive-accents ‘Richard Yates’, until I were forcibly restrained/intensely embarrassed. I feel like it would probably get me fired or something, though. Also doubt I would find a willing accomplice amongst my co-workers to film me, probably.

Think I will take the simplistic route and use Tao’s tip of subtitles to ‘muse upon’. I will try to make these subtitles slightly more dramatic by placing the definite article before each of them.

“Richard Yates” is the name of Tao Lin’s forthcoming novel which will be published by Melville house in September. I am excited by this novel, I have enjoyed 95% of other things I have read by Tao Lin and the coverage I have read on RY seems to suggest it may be his ‘best’ book so far. Richard Yates, the novel, being named Richard Yates has probably made me 60% more interested in it than I would have been if it were named [something else]. However, maybe, possibly impossibly given what I have already said, it also seems to give me very few preconceptions of what Richard Yates will make me feel.

I read, earlier this year, The Easter Parade by Richard Yates; influenced partly by Tao Lin and others mentioning his work. I enjoyed reading The Easter Parade a lot; it’s a book about some very depressing things, though, it did not make me very depressed. I am not sure why this is, possibly the manner in which the depressing things happened; they seemed bizarrely ‘acceptable’ within the book; powerful but not shocking or damaging somehow. Maybe I was depressed whilst reading it; I’m not sure now.

The Beautiful and Damned which has many similar, depressing, themes, I think, to The Easter Parade definitely made me very depressed. I think this idea of a depressing subject but not a depressing book can definitely be true of some of Tao’s work, though. Some characters of his seem very depressed but usually it is funny or calmingly thoughtful. It might be easier to call it ‘black humour’ or something but that doesn’t seem pleasing. Maybe they just seem sarcastically depressed a lot of the time, or something. I get the feeling from various sources that Richard Yates will be more holistically depressing, possibly.

I’m not sure that this is a good thing for me to write about. These have been my thoughts, in a vaguely chronological order, about the ‘cover art’ (not sure if this term is used exclusively for CD/Vinyl covers or if it can be used for anything with a cover) of Richard Yates. 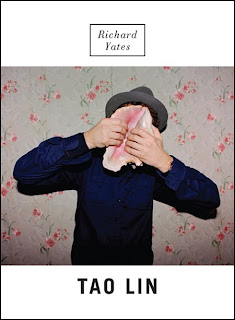 Seems weird, seems like a foreign object trying to blend in amongst other, non-foreign objects but doing it awkwardly.

Think that it actually looks sort of gross.

Poor starfish. (realised mid thought that the shell is definitely nothing like a starfish)

That guy looks like some guy I’ve seen wandering around my locality because of that hat.

The way his arms are angled makes me think he is about to/is mid dance. (probably some sort of ‘jig’ in an ‘Oliver Twist’ ‘cockney’ musical fashion. ((Not sure what a ‘jig’ is, entirely.))

That font at the top seems unlikely; seems ‘classy’.

The wallpaper is calming.

The shadow of the man is very dark and pleasing against the wallpaper.

Tao Lin posted a section of the index from Richard Yates to his tumblr page on the 9th of July. The section provides a data-base to consult when researching Tao’s use of the phrase ‘facial expression’ and what moods/emotions it has been used to show. I’m not sure I have read many novels that have indexes in them, I think it must be an unusual thing. It seems like it will be fun to look at the index and think about the book after reading it, maybe it will provide an ‘interesting pattern’ or ‘new depth’ or maybe just some ‘cool trivia’.

The index suggests, to me, that Richard Yates will follow in an ‘uncontroversial’ way from his previous work; continuing with quite concrete statements and simple sentence structure seen in SFAA unlike maybe the style used in Bed. The facial expressions themselves seem to lack ambiguity; they are words people would be able to identify with easily, maybe excluding 1-3 of the words, I feel this is accurate. I think this will be good, I feel that maybe more ‘metaphorically-heavy’, prose may be easier to appreciate but harder to connect with on the whole, for a reader. Feel like that last sentence is maybe entirely redundant, not sure.

It seems like it would be bad to use a couple of paragraphs from a piece of Tao Lin’s work to try and show something. I think his work really is needed to be read in its whole although also I think many sentences are quote worthy on their own. I just have a feeling that 2-3 paragraphs of Tao Lin’s writing would be a bad amount to use for something.

I feel sort of worried about reading Tao Lin’s work. I find I enjoy whilst I am reading it but then seem almost unable to remember the details of a lot of it. I think it has altered to some degree the way I read other things and I think it has left an impression on my world view. I seem to walk away with an understanding of the book, its attitude, style and point but lack an insight into the actual narrative or characters. I’m not sure why this is. It may be that, because the books are written in a so easily digestible manner it is easy to rush through them. I read Eeeee Eeee Eee very quickly and I also read SFAA very quickly which I think meant I missed out on part of the book, and that is sad.

I read on the internet, somewhere (I had a brief look just now and couldn’t find it, but it is there in the RY coverage) someone talking about this, something about how it is easy to think nothing is going on in these novels until you look back and see what you have just been through; what has amassed almost beneath you during the reading of the book, I think that this is accurate. I read Bed much more slowly, reading a few stories at a time whilst reading other books and I think I gained more from it in this way. I think I will re-read the others at some point soon.

When I do buy Richard Yates in September I think I will read it in a more peaceful way. I have read it being described as ‘raw’ and ‘crushing’ I do not want to ruin those qualities, they seem like qualities I would enjoy a book to possess. I often worry about ruining books by reading them in the wrong way. I think I have done this before with The Great Gatsby and Metamorphosis and probably others. I don’t want to do this with Richard Yates and I don’t think I will.

Just looked again at Tao Lin’s blog post about this competition. Think maybe I was supposed to reference more stuff or something, not sure. Might just link random words to things or something . A bit worried if it is 70% on topic or not.
Shivering at the thought of the ‘stamp of shame’ that it is for one to be placed within the ‘illegitimate entries’ section. Have no idea what classes as on topic right now, can’t seem to distinguish between on topic and off topic anymore.
Posted by Harry at 13:18